Below is a list of all out club locomotives.

Samson is based on the popular design by Roger Marsh called ‘Thomas 2’. It was built by R. O’Neil for his own pleasure over a period of six years, but other than testing it, the loco did not see much use. It was purchased from the builder by EHMR in April 2014 and has become a firm favourite with our passengers, looking very much like THOMAS the Tank Engine in its blue livery.

Chassis built by Andrew Robelou in 2000 and purchased by the society in 2001. Originally named ‘Tinker’, this engine has been renamed in 2007 as ‘Peter N Brown’.

This engine was built in 1991 by Andrew Robelou with a steel boiler by Bennetts. This has been the workhorse of the society for many years and it must have been pulling passengers in excess of 10,000 miles. Overhauled May 2006, repainted blue.

Formally owned by the late Robin Lee, Ellan Bee was built by Fred Cormick and John Barber, both then members of the Manx Steam & Model Engineering Society in the Isle of Man. Ellan Bee spent the first two years of her working life on the Orchid Line at the Curraghs Wildlife Park entertaining many thousands of young & old around the quite extensive 7¼ Gauge track built and operated by the MS&MEC. Although the name Ellan Bee is partially derived from the fact that the locomotive is based on a Lynton & Barnstable, the Isle of Man is also referred to as Ellan Vannin, and that’s how she got the spelling of Ellan rather than the more popular Ellen This locomotive has appeared at 7¼” Gauge Society AGMs in Belfast Weston Park and Comrie.

Built in 2013 by ‘Ride on Railways’, this locomotive is based on ‘Lady of the Lake’ from Ruislip Lido Railway. Powered by 4 110amp hour batteries driving 2 x 750w DC motors via a digital control panel.

Built as a basic loco by Roanoke in 2000 and modified by Pete Smith ( PJS Engineering ). This loco is driven from the tender and therefore it is perfect for the larger members of the society or disabled people.

This loco was built in 1987 and was rebuilt in 2000 after many gruelling miles of service. This loco will pull anything and has just had a new engine fitted.

Lee Endeavour built in 2017 by ‘Cromar White‘ of Anglesey is our all weather Bo-Bo diesel-hydraulic locomotive, it’s outline is based on a European Switcher type locomotive. It is powered by a Kubota 3 cylinder water-cooled diesel engine driving a hydraulic pump and two powered bogies.

Would you like to help?
We are looking for volunteers, to help with station duties, signalling and driving.
Read more …

EHMR is proud to be a member of Britains Great Little Railways. Visit them to find other little railways from around the country. 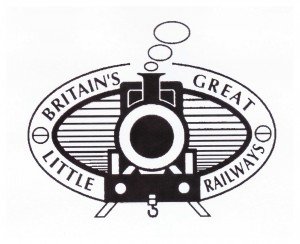